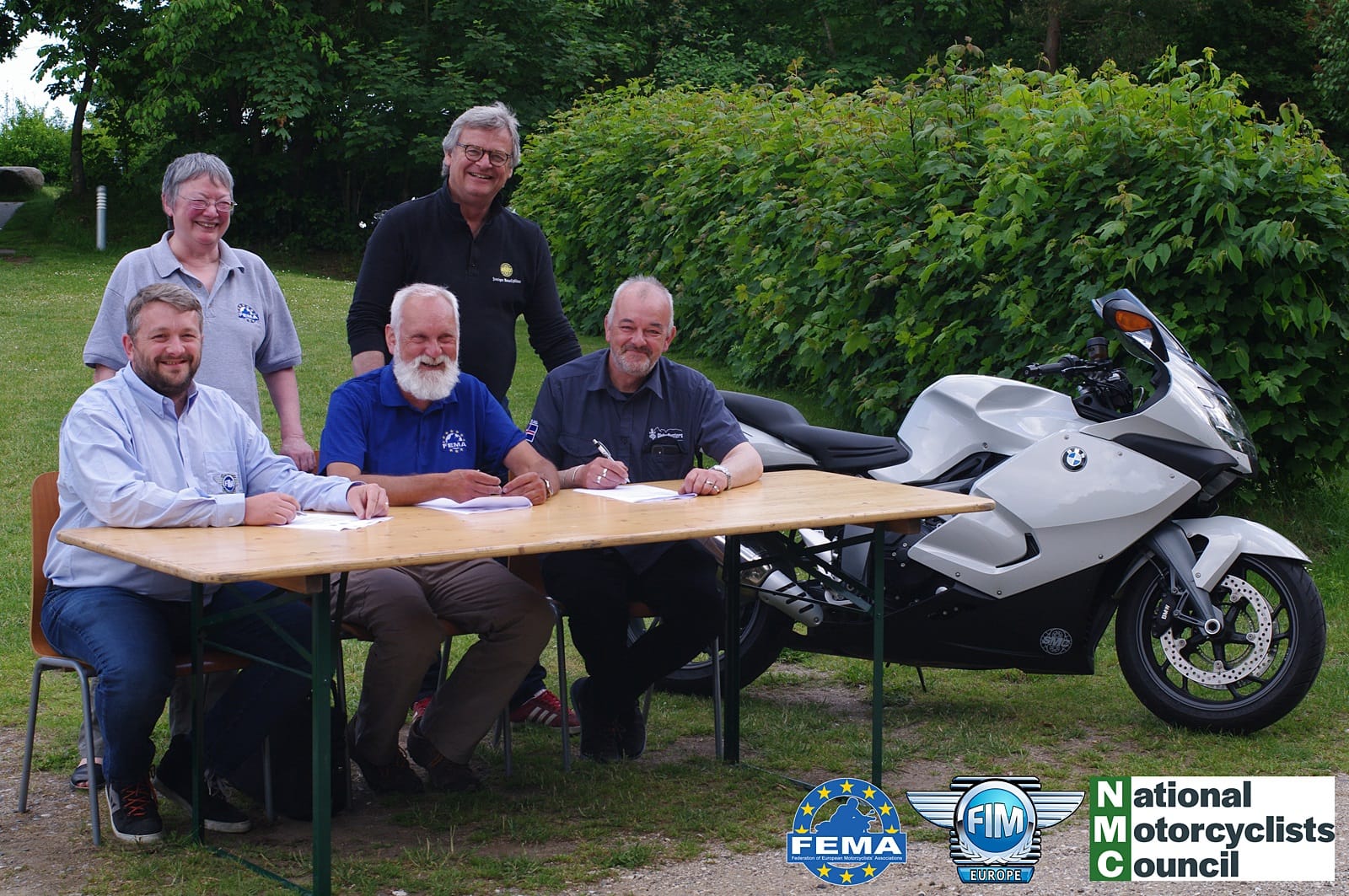 The National Motorcyclists Council (NMC), the Federation of European Motorcyclists Associations (FEMA) and the Fédération Internationale de Motocyclisme Europe (FIM Europe) have agreed a new partnership to work together on common issues that affect motorcycling. The partnership extends the cohesiveness of the motorcycle lobby internationally and creates new potential to impact positively on public policy which affects motorcycling in a range of areas.

The NMC has worked closely with both FEMA and FIM Europe on a range of issues since it was founded. These relate to motorcycle safety, transport policy and the future of motorcycling. The three organisations recognise that International collaboration is key when it comes to addressing current and future issues that affect motorcycling. Given the opportunities and challenges that motorcycling faces, plus the potential that motorcycles offer to both society, transport, sport leisure and cultural heritage the three organisations have decided to extend their partnership though agreeing a memorandum of understanding to formalise and strengthen the bond between them.

FEMA, FIM Europe and the NMC agree that it is essential that the interests of motorcyclists are recognised and appreciated by the European and international institutions, plus other regulatory and legislative bodies, on both a national and international level.

Dolf Willigers, FEMA’s general secretary: “In the past eight years FEMA already established a good working relationship with FIM Europe. With the changed situation in Europe after the United Kingdom leaving the European Union, it is very important to have cooperation between UK-based organisations and organisations that focus more on the rest of Europe, as is already shown by the issue of transporting vehicles that are not driven or ridden by their owners across the borders between the UK and the EU. For us, the most logical step was extending the existing cooperation between FIM Europe and FEMA with the National Motorcyclists Council, where FEMA and FIM members are already represented. I am happy that we have received support from our organisations to make the already existing cooperation between us formal by signing the Memorandum of Understanding. Last weekend has already shown that we are looking forward to a pleasant and productive working relationship.”

Christopher Hodder, FIM’s public affairs manager: “The FIM and FIM Europe has had a long history of working with our colleagues in the UK and this continues to this day. As home to some of the world’s most famous brands and most famous riders, the UK is a culturally significant part of motorcycling history. As UK riders seek to establish themselves independently on the international lobbying scene, it is good that we continue to maintain dialogue and work together on key issues affecting one of the largest motorcycle markets in Europe. We look forward to collaborating on key concerns across Europe in the future.”

Craig Carey-Clinch NMC’s executive director: “The NMC’s members are delighted with this new partnership. It is very clear that many issues affecting riders have an international, not just national basis. In the short time since the NMC was founded, there have already been a number of issues where positive work with FEMA and FIM Europe has been and will be to the benefit of riders group work and objectives. This new cooperation further underlines the growing impact and credibility of the international motorcycle lobby in total, with a common approach to issues of joint concern being the best way to create positive change. We look to very positive joint working in the years ahead.”

The Federation of European Motorcyclists’ Associations (FEMA) represents European motorcyclists and is formed by 22 motorcyclists' organisations from 17 countries. Its purpose is to promote, protect and preserve motorcycling. FEMA’s mission is to promote riders’ interests and defend riders’ rights throughout Europe and globally. FEMA’s secretariat is based in Brussels, in the heart of the European Union institutions. Our members of staff are working full time to make sure that riders’ interests are looked after.

The aims of the FIM Europe are to develop and promote all forms of motorcycling in Europe as well as the co-operation and friendship between its members. FIM Europe operates in conjunction with FIM in all issues linked to the organisation of international non-sporting events held in Europe and in the general promotion of motorcycling. FIM Europe owns the FIM sporting rights on continental championships.

The National Motorcyclists Council (NMC) is a coalition of British motorcycling representative organisations, which works together on commonly held positions about issues where motorcyclists seek to change or influence government policy. It also researches issues to both inform campaigning and support the individual work of its members. The NMC’s mission: working together to help assure a positive and sustainable future for motorcycling.

2. FEMA's edition of this joint release can be found here: https://www.femamotorcycling.eu/working-together/