Charley Boorman, LARA and the NMC Warn of Clear and Present Danger to Motoring and Motorcycling on Rural Roads 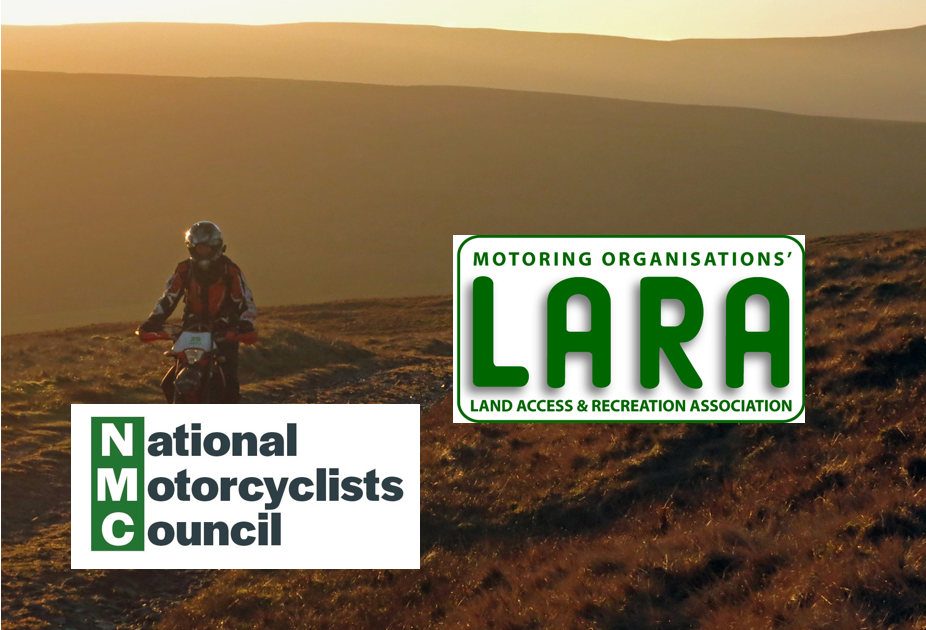 The motoring and motorcycling umbrella organisations the NMC and LARA, have today called on riders and drivers to respond to a Government consultation which calls for views on whether motorcycles and four wheeled vehicles used for leisure and tourism should be banned on a wide range of unsealed ‘green’ roads and minor tarmac roads. This new campaign is supported by Charley Boorman, famous for his ‘Long Way Round’ round the world motorcycle adventures with Ewan McGregor, plus his other global journeys and TV shows ‘By Any Means’.

The Government has issued the consultation on the back of a ‘Landscapes Review’ into National Parks and Areas of Outstanding Natural Beauty. Although the Landscapes Review does not mention motor vehicle use,  the Government response to the Review has a section on the impact of recreational motoring on green roads. The new consultation includes questions on whether the Government should legislate to restrict recreational motor vehicles on unsealed and unclassified roads around the country. One suggestion is to widen this to include all types of minor road. The potential impact of this consultation signals a clear and present danger to motoring and motorcycling on green lanes and other tarmac rural routes.

There are several organisations which have long campaigned to ban the motorised use of green roads and these groups have seized on the consultation to launch a major push to get roads bans in place. The NMC and LARA are therefore seeking the help of riders and drivers to counter this threat and preserve countryside access for all.

Opponents of vehicles in the countryside cite damage caused by vehicles to unsurfaced routes, plus noise and anti social behaviour. But instead of being a nuisance, green roads motoring and motorcycling brings benefits to rural areas, including positive economic impact to local communities. The Trail Riders Fellowship estimates this at over £100million per annum for motorcycling alone. Green roads use supports local and rural economies by spending on campsites, B&Bs, pubs, hotels, local shops and local filling stations. A large number of motorcycling and four wheel specialist businesses are also supported by green roads users. A Government survey found the majority of traffic using green roads is for land management and agriculture. Given that land management and agricultural use is the majority of traffic on these road, bans aimed at vehicles used for tourism and leisure would do little or nothing to decrease damage on green roads.

Concerns about damage can be overstated and can be resolved by proper management of green roads.  Each year hundreds of local conservation projects are undertaken by two and four wheeled groups, including inside national parks and other high profile areas. This has a positive value of hundreds of thousands of pounds supporting underfunded and under resourced authorities and contributes to the vitality of the countryside. Repairs are mainly required due to poor maintenance and water erosion, plus damage caused by heavy agricultural equipment,  rather than major damage from motorcycles and four wheeled vehicles used for countryside access. Road bans would mean this valuable and essential work would stop.

The road network inside and outside National Parks and Areas of Outstanding Natural Beauty must be for everyone to enjoy. Access must not be forbidden to any mode of transport without evidence that real and widespread damage, over and above that caused by agricultural vehicles, is being caused. Less than 2% of highways are green roads available for public motorcycle use, reducing this further will increase pressure on what remains.

Concerns over illegal use of specific areas of the countryside should be tackled using existing legislation and restrictions. No new laws are needed in this area. Experience shows that simply prohibiting vehicular access does not work because those who do damage green roads by acting illegally and irresponsibly will not be deterred. A blanket removal of rights would cause access problems for many land and property owners, damage tourism and deter other outdoor recreational activities. Additionally, driving on green lanes is one way that people with mobility problems can access the countryside, meaning that road bans on both green and sealed roads would be highly discriminatory.

The NMC and LARA are calling for riders and drivers to respond to the consultation, which is being managed by the Department for the Environment and Rural Affairs. Although there is an online questionnaire, this is a more complicated way to respond and covers a lot of additional areas. A far simpler way to respond is by sending an email to landscapesconsultation@defra.gov.uk by April 9th. Objections should be registered by saying that you do not agree with restrictions proposed in questions 13-17 of the online questionnaire and use the points made above as part of your email. (further guidance here)

Global motorcycle adventure traveller Charley Boorman said: “Removing vehicular access from parts of National Parts, AONBs and other rural areas would have a very negative impact on the vitality of the countryside. Motorised recreation and tourism on green roads is not only positive economically and socially, but riding green roads has a very positive impact on the health and wellbeing of those who take part in this activity.  I urge the Government to find against rural road bans and to work with organisations in a positive way to manage green and other roads, so that the countryside remains open to all.”

LARA’s Dave Waterman said: “Based on experience during the pandemic, if we are going to ban visitors to the countryside on the basis of the bad behaviour of a minority, then people on foot should be first. Fly camping, lighting fires, trespassing, damaging property, littering and worse. LARA members share the government’s aim of preserving our network of green roads for everyone. They care as much, if not more than those who seek to ban motor vehicles use, but just have different - and more realistic - ideas on how to achieve that. We urge the Government to reconvene the currently dormant Motoring Stakeholder Working Group, so that sensible approaches to countryside access can be developed and implemented.”

The NMC’s Craig Carey-Clinch said: “The work of LARA and its members has long been vital in protecting green road access for motorcyclists and other leisure users. What we are now seeing is a full frontal attack on rural vehicle use, which is not just about green roads, but also tarmac routes. The extension of road bans via Traffic Regulation Orders to some tarmac roads during the pandemic was a sign of things to come and the DEFRA consultation implies the consolidation of this approach to further impact tarmac road motorcycling. We urge riders to respond to today’s call from the NMC and LARA and email a response to the consultation.”

2. Further guidance for people wishing to respond to the consultation can be found here.