Procedures are emerging for owners transporting their own road registered motorcycles into the EU in vans or on trailers, but serious issues remain for freighting companies. 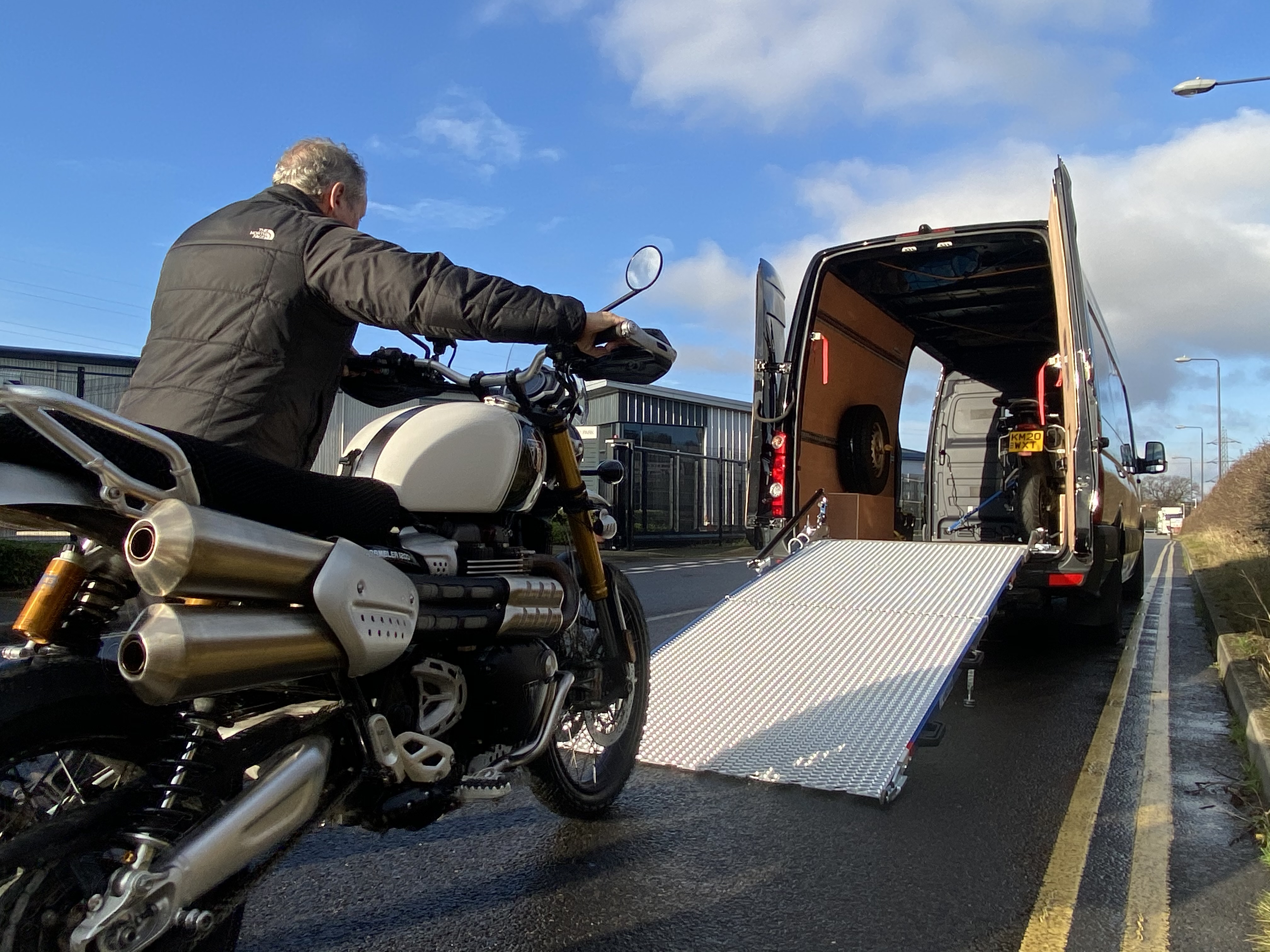 In this update, NMC Chair, Anna Zee from the British Motorcyclists Federation, explores the issues surrounding transporting motorcycles into the EU via vans and trailers and the progress the NMC is making to get new post-Brexit procedures in place. This article follows up from the NMC press release in June 2021 which alerted to problems in this area (here).

If you like to take a biking holiday in Europe and you prefer to ship the bike out and back rather than riding it all the way then you may be affected by an unanticipated consequence of Brexit.

Riding your own bike in and out of the EU remains straightforward and there is government guidance to refer to here. But if it's in a van or on a trailer the situation on the borders is different.

But there is some emerging good news in this area if owners all accompany their bikes. Going by the feedback from various countries so far, you should be all right if you and your mate put your bikes in your mate's van and travel together in the van to where you want to ride, though the exact border procedure may vary from country to country. The important thing here is that all the bike owners will be travelling with their bikes. There might be a greater possibility this year that you may get stopped away from the port - not uncommon in France - but if you have all the paperwork then you should be ok. But – and this is important – you must have originals of all your documents, particularly the V5.

If you air-freight your bike via a 'bonded' freight forwarder into the EU, that will work similarly to doing this to other international destinations, with local customs rules applying.

Now that the requirements for each EU member state on 'owner accompanied' transportation are becoming clearer, the NMC have called for the Government to issue a guidance note for motorcyclists travelling with their own bikes in vans or on trailers, setting out what people can expect and what they need to do to prepare.

If, however, you prefer to get your bike transported by a third party by road then a serious issue remains. Your bike is now freight carried by a third party and now that the UK is no longer in the EU it is subject to Customs regulations.

Yes, there are recognised procedures to temporarily export goods for show purposes and for racing – if your motorcycle is not road registered. In this case an ATA carnet is required - this can be dealt with by your shipper; costs a bit but that's how it's done. You'll also need this carnet if you are taking your own unregistered motorcycle into the EU for a sports event or show. (You also have to demonstrate that everything you took into the EU you take back out again. For musicians it may be back to the days when a touring band had to keep all the broken violin strings, broken drumsticks and used saxophone reeds etc. until they were back in the UK). However an ATA carnet is definitely not intended to be used for a road-registered vehicle and anyway you really don't want to have to pay for one. There is another sort of carnet, the Carnet de Passage en Douane, but that is even more expensive and in any case, most EU countries don't recognise them.

So, what to do? The UK Customs and Excise department give you different answers depending on who you asked and the day of the week - i.e. they didn't know.

The NMC was approached by a few companies for whom transporting bikes has been their main business. Of course 2020 was a really bad year for them as no-one was going anywhere very much but at the beginning of this year the transitional period ended and then the border crossing problem was identified. In 2021 it is actually easier to ship a bike by sea or air to America or the Far East than to Europe - there are clearly recognised procedures for wider international destinations.

Fortunately, Executive Director Craig Carey-Clinch talked to contacts in the Civil Service and was put in touch with a group in the Cabinet Office who are dealing with post-Brexit border issues. At our first (Teams) meeting with them we were able to explain exactly what the issue was. After some work on their side it also became clear that negotiating an arrangement with the EU as a whole was not a good option, as despite the Single Market, border procedures and protocols continue to vary between member states.

Where are we now?

The NMC is asking for a simple and inexpensive procedure to deal with third parties shipping road-registered vehicles. What we have suggested is a letter of authorisation, or a simple 'one page' power of attorney, which could perhaps be obtained via the Post office at moderate cost like International Driving Permits. This document would be given to the shipper with the bike. The UK Government agrees.

But getting our own Government to support what we are asking for is the easier part of dealing with the issue.

Our new friends in the Cabinet Office have been in touch with the various Customs departments in France, Belgium, the Netherlands and Spain to negotiate an agreement with each. And while they are about it they have been gaining agreement that bikes in vans, accompanied by their owners, do not require additional paperwork.

Sadly, at this time, while we are approaching a resolution for those taking road registered bikes abroad themselves, the Cabinet Office are hitting brick walls when it comes to third parties shipping bikes into the EU. Their customs counterparts on the other side of the Channel are so far unwilling to offer a solution to the problem. Given that there is no ‘single market’ as such in border crossings, each Government has a different view and the EU has yet to regard the matter as a priority.

The NMC will be stepping up pressure on the political end of things on the UK side, as although government officials have been incredibly helpful, Ministers themselves will now need to step in on the issue to support the efforts of officials.